Within three months of mainnet launch, Injective produced over 8.5 million blocks and processed nearly 40 million transactions. KYVE will not only index the wide assortment of data for Injective, but will also allow developers building on Injective Protocol to leverage KYVE’s data storage solution to access reliable, verified, and permanently-stored data. Thus, data storage on Injective Protocol and its DApps can truly be decentralized.

“We’re thrilled to welcome Injective into the KYVE Network and look forward to working with the broader community to build the cross-chain future,” said John Letey, co-founder of KYVE. “Injective is revolutionizing the way in which traders access markets and manage their digital assets. Our data storage solutions can allow Injective to further decentralize its data and make it more accessible for the masses.”

KYVE has previously worked with some of Injective’s close ecosystem partners, such as NEAR and Aurora. The goal of the Injective community has always been to facilitate a free and trustless financial network built on fully decentralized infrastructure, making it easier for developers to build interoperable DeFi applications.

“Decentralized data storage will be an integral component of Injective’s infrastructure moving forward,” said Injective Labs’ co-founder and CEO Eric Chen. “The Injective community is excited to be working alongside KYVE to further drive adoption of scalable and immutable data for users globally.”

On-chain data streaming and storage will continue to be an important building block for the Injective ecosystem as the universe of DApps continues to expand.

KYVE is a next-generation protocol that enables data providers to standardize, validate, and permanently store data streams. By leveraging Arweave, the solution ensures the scalability, immutability, and availability of these resources over time, and by using Moonbeam smart contracts, KYVE is EVM compatible. KYVE is backed by top VCs, including Hypersphere Ventures, Coinbase Ventures, Mechanism Capital, CMS Holdings, and blockchains such as Arweave, Avalanche, Solana, Interchain, and NEAR.

Injective is a custom interoperable layer one protocol for building powerful exchange, DeFi, derivatives & Web3 applications. Injective was created using the Cosmos SDK and is able to achieve instant transaction finality while sustaining lightning-fast speeds. INJ is the native deflationary scarce asset that powers the Injective Protocol and its rapidly growing ecosystem. Injective is incubated by Binance and is backed by Pantera Capital. 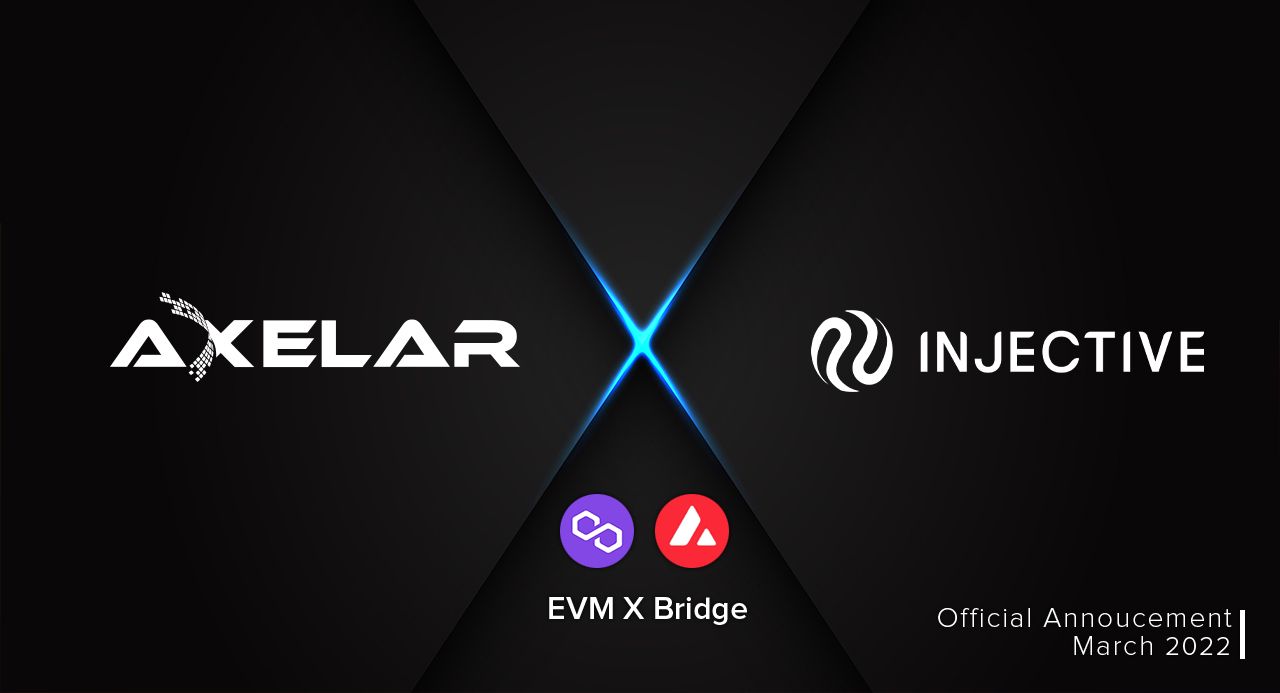 Injective is collaborating with Axelar to bring new EVM blockchains into the Injective ecosystem. This partnership will involve the Inter Blockchain Communication (IBC) integration of the Axelar blockchain alongside a