Injective governance has now been launched for spot markets! Starting today, users participating in Equinox staking will be able to propose and vote on new spot market listings.

The governance process is a core components of the decentralized protocol and will serve an important role in the upcoming mainnet release. In addition, participating in market proposals via governance will enable you to earn additional APY boosts on Equinox Staking!

This piece will cover some of the core functionalities of Injective governance and how you can get started right away.

You can also find a walkthrough in this article if you scroll down.

All of this was made possible by an amazing cohort of validators and community members who are rigorously working towards helping to secure the network. There has also been a strong uptick in the community helping to provide valuable feedback in further optimizing staking on Injective through various social channels such as the newly revamped Discord server.

Injective governance is a central part of the protocol. In order for a network to be considered truly decentralized, it must be governed by a user base that is ideally distributed globally. In an effort to achieve full decentralization it was decided upon to introduce governance as part of Equinox Staking which is largely unheard of in the crypto ecosystem since governance processes are usually not found until much later in a protocol’s development cycle.

Injective governance will allow you to propose entirely new spot markets on the exchange. Anyone staking on Injective will be eligible to vote on specific proposals. Only when a proposal wins the vote can it pass and the respective market be listed on the Injective exchange.

The aim is to have governance for nearly all features of the protocol. The current governance process focuses on spot market proposals but the idea is to increase this breadth of governance dramatically moving forward. So, in the coming weeks users will be able to take part in many more governance features.

Here is a short guide that you can follow to start proposing new spot markets through the governance process.

2. Under the Propose section, open the dropdown menu and select “Launch a spot market”.

3. This will open an interface in which you can select a base and quote currency for your new spot market proposal. If either the base or quote currency you would like to select is not present, click on “Create new Denom”. Demon implies “denomination”, which asks you to input a custom rate.

4. This will open a modal where you must fill in the contract address for the denomination you would like to add. Make sure that you have some amount of this denom in your Kovan wallet before proceeding. With the contract address filled in, click “Get ERC-20 Token Balance” and sign the metamask transaction.

5. The next modal will display your balance of the contract address you entered in the previous step. Enter some amount less than or equal to your holdings of this contract and click “Transfer” and sign the metamask transaction.

6. After a few moments, your added denom should be available from the base and quote denom dropdown menus. Fill in the rest of your proposal.

For the “Deposit” amount, any amount will work. However, for a “launch a spot market” proposal to be accepted through governance to enter the Voting stage it must reach 1,000 INJ. If you deposit 1,000 INJ with your proposal, it will be automatically accepted for voting. If you deposit less than 1,000 and voters do not deposit amounts for your proposal within two days, the proposal will automatically fail without a vote.

8. Very shortly after submitting your proposal, you should see your proposal appear under the Proposals section in the Deposit stage.

9. If you click on your proposal row under Proposals, you will be able to access a more expansive dashboard. From here, you can see how much INJ has been deposited, and you can even increase the deposit amount.

Once your proposal has been accepted into the voting process, it will have 1 day to collect votes. A proposal must attain over 50% of the vote in order to be accepted.

33% is the Quorum. Quorum is defined as the minimum percentage of voting power that needs to be casted on a proposal for the result to be valid.

50% is the Threshold. Threshold is defined as the minimum proportion of Yes votes (excluding Abstain votes) needed for the proposal to be accepted.

10. Click the row under Proposals under Voting to get to the voting screen. Click either Yes, No, Abstain, or Veto and then sign the metamask transaction.

You will be able to see your vote under the corresponding vote section, along with others who voted that way as well.

That’s all! You are now ready to start taking part in Injective governance. 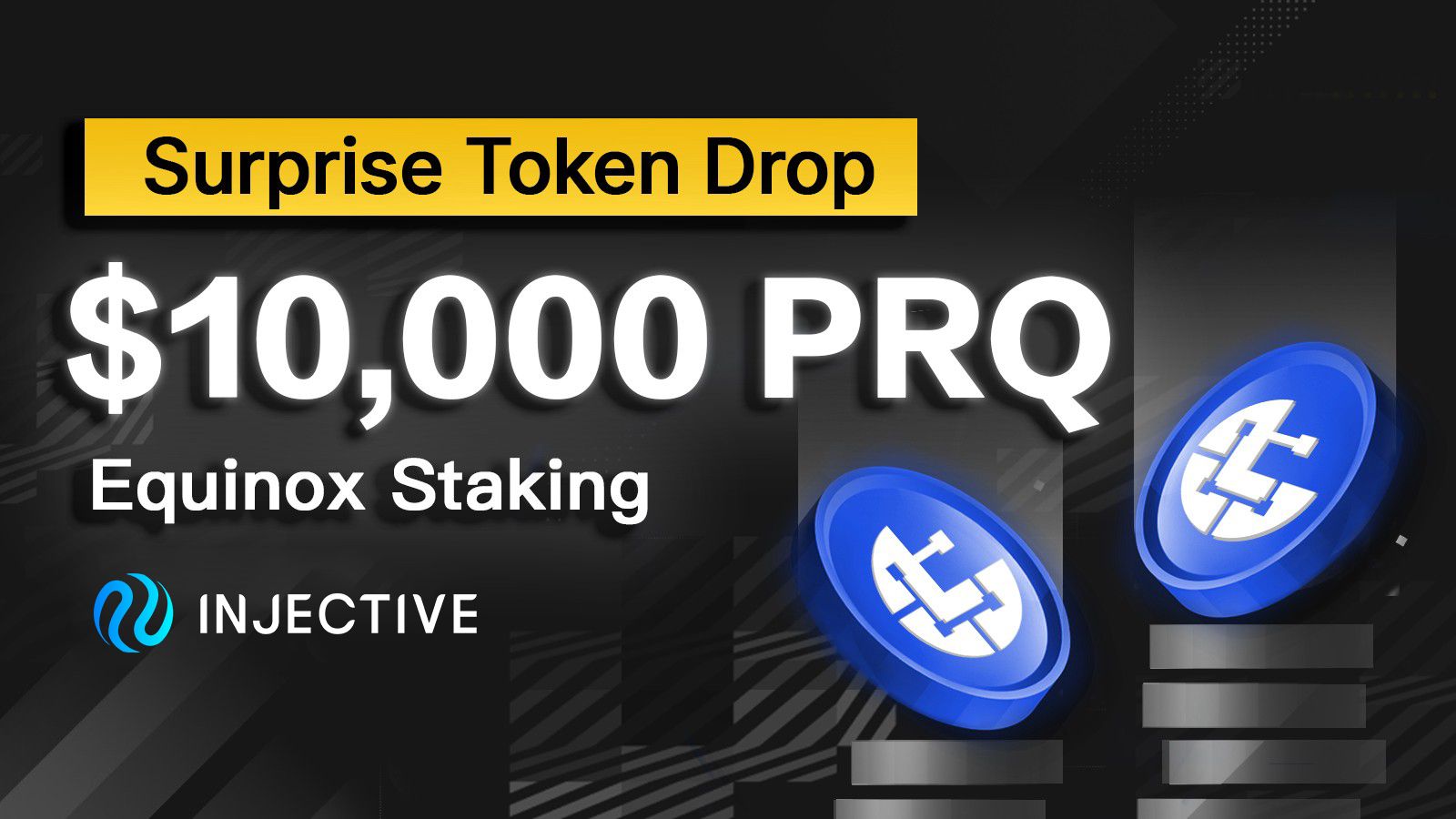 Another Equinox Staking surprise drop has now been launched. This time friends at PARSIQ sponsored the event and dropped $10,000 worth of PARSIQ tokens (PRQ) to Injective users. Injective 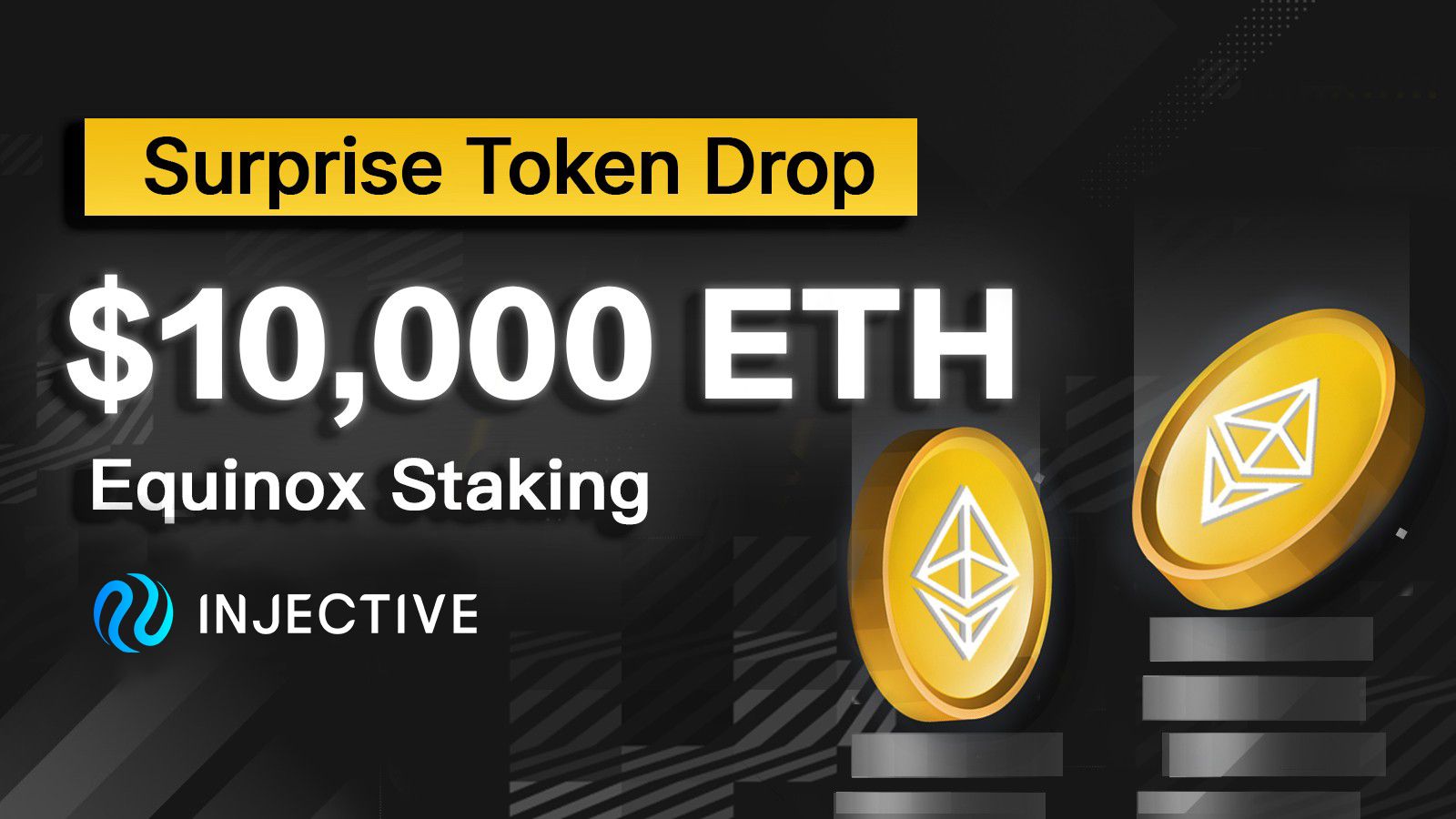 The first official surprise token drop in the Equinox Staking competition has been released. This token drop consisted of a total of $10,000 in Ethereum (assuming an ETH price