Decentralized finance (DeFi), one of the fastest growing ecosystems in the cryptocurrency market, has long been a dilemma for regulators, given the decentralized nature of the space.

In 2022, United States regulators paid special focus to the nascent area with significant attention to ending the anonymous nature of the ecosystem.

DeFi protocols allow users to trade, borrow and lend digital assets without having to go through an intermediary. DeFi ecosystems by nature are decentralized with the majority of projects being run by automated smart contracts and decentralized autonomous organizations (DAOs). Most DeFi protocols don’t require heavy Know Your Customer (KYC) requirements, making way for traders to trade anonymously.

A leaked copy of a U.S. draft bill in June showed some of the key areas of concern for regulators including DeFi stablecoins, DAOs and crypto exchanges. The draft bill paid a special focus on user protection with the intention to eliminate any anonymous projects. The bill requires any crypto platform or service provider to legally register in the United States, be it a DAO or DeFi protocol.

Sebastien Davies, principal at institutional infrastructure and liquidity provider Aquanow, blamed regulators’ lack of technological understanding as the reason behind the regressive approach. He told Cointelegraph that events like the sanctioning of Tornado Cash users after the application was added to the Specially Designated Nationals list produced by the Office of Foreign Assets Control demonstrate a lack of technological understanding. He explained:

“I think the point that policymakers were trying to get across is that they’ll make it very difficult for developers/users of protocols that completely obfuscate transaction history and that they’re willing to act swiftly. Officials may eventually walk their stance back, but the precedent will be severe. Participants in the digital economy should continue to engage with regulators as often as possible to maintain a voice at the table to avoid these types of shocks and/or partake in the balancing dialogue after the fact.”

Another discussion paper by the U.S. Federal Reserve Board released in August claimed that even though DeFi products represent a minimal share of the global financial system, they may still pose risks to financial stability. The report noted that DeFi’s resistance to censorship is overstated, and transparency could be a competitive disadvantage for institutional investors and an invitation for wrongdoing.

The concerns of regulators around user protection are understandable, but experts believe that shouldn’t come at the cost of innovation and progress. If the focus is only on collecting data and putting barricades that hinder innovation, then the U.S. would be left behind in the innovation race.

“Take the fact that policymakers and regulators continue to insist on eliminating anonymous crypto projects and teams, de facto trying to choke this industry by targeting its builders. But this won’t be feasible in the more sophisticated projects that are being developed according to the ethos of the community.”

He added further that there’s a real danger that the legislators will be successful in driving most of the crypto industry away from North America. He said, “This is also problematic as the rest of the world still needs large nation-states to stand up to the bullying from FATF and other undemocratic institutions that seem more keen on preserving their monopoly on power than on fostering a risk-based approach to innovation.”

On Aug. 30, the U.S. Federal Bureau of Investigation released a fresh warning for investors in DeFi platforms, which have been targeted with $1.6 billion in exploits in 2022. The law enforcement agency warned that cybercriminals are taking advantage of “investors’ increased interest in cryptocurrencies,” and “the complexity of cross-chain functionality and open source nature of Defi platforms.”

While decentralization is a key aspect of the DeFi ecosystem, criminals can take advantage of it to process their illicit transactions. However, it is important to note that laundering via crypto has historically proven to be riskier as they can be traced and blocked. Criminals laundering their funds even after several years of the theft have been caught.

Crypto regulations themselves are a significant discussion point in the mainstream industry, given that, apart from a few states with niche crypto-centered laws, there’s no universal rule book in the United States for crypto operators. Thus, in absence of fair clarity around the overall crypto market, regulating a niche ecosystem could be a complex task.

Jackson Mueller, director of policy and government relations at blockchain-based financial and regulatory technology developer Securrency, told Cointelegraph that there’s a growing interest among policymakers regarding the DeFi space.

However, they are currently caught up between whether to apply existing long-standing yet arguably unsuitable regulatory regimes or consider stepping outside the regulatory box to develop appropriate and responsible frameworks. He explained:

“Policymakers are never going to be comfortable with a system based on complete anonymity, hence the push for the application of Anti-Money Laundering and KYC regulations. While this obviously triggers privacy and level-playing field concerns, advanced technologies capable of being deployed today can greatly preserve an individual’s right to privacy, without significantly restricting the potential of DeFi services or propelling opaque markets. Regulated DeFi is not an oxymoron. The two can, and must, coexist.”

A new proposal released by the U.S. Securities and Exchange Commission (SEC) in February earlier this year highlighted the lack of understanding of the space by the SEC. The proposal aims to amend the definition of “exchange” by the Securities Exchange Act of 1934. The amendment would require all platforms with a certain threshold transaction volume to register as exchanges.

The proposal threatens many DeFi projects as most of them are not operated centrally, and having to register as an exchange could very well spell doom for the industry. Hester Peirce, the SEC commissioner who is a well-known crypto advocate, was among the first to call out the flawed proposal and said it could reach more types of “trading mechanisms, including potentially DeFi protocols.”

“DeFi regulation requires a mindset shift — away from the concept of a ‘cop on the beat’ and toward the concept of ‘community management.’ In a DeFi world where the nature of interactions and entities is decentralized, the entire nature of the relationship between the regulator and the regulated must change. As opposed to being reactionary, regulation must be reimagined to shift towards preventative measures, supporting the constructive development of the industry.”

She added that Global DCA is working specifically on this subject to design and create a self-regulatory organization that forms a broad dialogue with a diverse group of stakeholders in the digital asset ecosystem. These insights and perspectives will be “reflected back in a framework for self-regulation which may help to advance market integrity and consumer protection.”

Eric Chen, CEO and co-founder of DeFi research and development firm Injective Labs, told Cointelegraph that ecosystem stakeholders should have an input in regulatory discussions:

“I personally believe that regulators should have more open conversations with Web3 companies and founders. I think this dialogue would help both sides of the spectrum to reach definitive regulatory clarity more rapidly. Many may not recall but the early Web2 space was also beholden to an opaque regulatory structure. This of course was rectified over time as regulators and founders began to work together to craft proper guidelines.”

Any new technology that gains mass traction becomes a point of concern for regulators. However, their approach is key to determining if that technology can be utilized for good or simply prohibited because of a few bad actors. Industry experts believe that the current approach to regulating the DeFi market under existing financial laws could be devastating for the nascent industry and that dialogue is the right way to move forward at this point.

This article originally appeared on CoinTelegraph. By Nicole Buckler DeFi: Is it the future of finance? Or too volatile to become mainstream? A panel of experts gives us their thoughts. The panel of experts didn’t all agree on the future direction of DeFi. Some, like Anderson Mccutcheon, the CEO and Founder of Chains.com isn’

Injective has raised $40M to accelerate the adoption and growth of Web3 finance. The funding round consisted of Jump Crypto and BH Digital (the crypto arm of famed hedge fund manager Alan Howard). This new capital will enable Injective to spur further development aimed at creating the industry-leading blockchain optimized
Suggested articles
View all articles 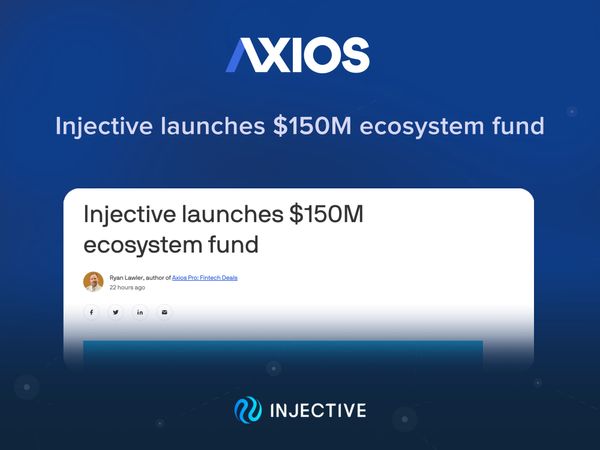 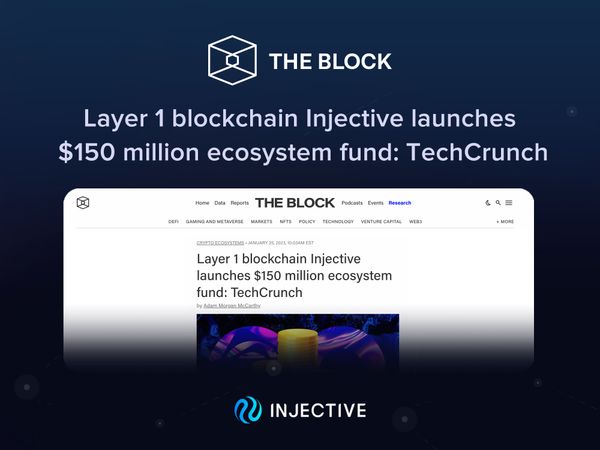 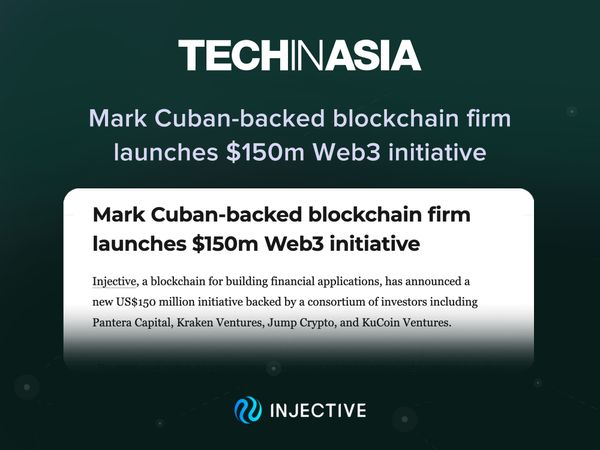