Injective Protocol is one of the first universal “DeFi” (Decentralised Finance) protocols for cross-chain derivatives trading, so the launch of the Testnet is an important milestone. Injective’s main competitors (centralized and decentralized exchanges) include CME Group, BitMEX, LedgerX and OKEx, among others.

As well as being incubated by Binance Labs, Injective Protocol is also backed with $3 million in funding from noted blockchain investors Pantera, Hashed and others. Pantera has had some successful exits, including Kik, Bitstamp and Blockfolio.

Paul Veradittakit, partner at Pantera Capital, said in a statement: “Injective’s Solstice testnet trades and feels like a state of the art derivatives exchange but it’s actually entirely supported by a fully decentralized infrastructure. With a 1 second blocktime, instant finality, and full EVM support, I’m confident that Injective will be able to pioneer the next wave of decentralized derivatives trading”.

Injective’s team emerged from Stanford University and has been building and testing its platform privately since 2018, while validating it with several large funds, market makers and institutional traders. Prior to Injective, Eric Chen, CEO and сo-founder, was working at hedge funds and worked in cryptographic research at a blockchain-focused fund.

Injective has been working toward a mainnet and has already announced partnerships with top blockchain companies such as Elrond, Ramp DeFi, Findora and Frontier. Its layer-2 decentralized exchange protocol lets traders trade across Ethereum, Cosmos and others, using Tendermint-based Proof-of-Stake (PoS) to facilitate cross-chain derivatives trading.

Centralized exchanges have been known for operational failures like front running, exit scams and exchange hacks. At the same time, existing DEXs are still facing problems such as high transaction fees, low liquidity, inconvenient UI/UX and slow speeds. But the trading volume of decentralized exchanges reportedly grew 70% in the middle of 2020, setting a recent record high of $1.52 billion. So there’s clearly an appetite for this approach.

The advantage of the approach used by Injective combines the advantages of decentralized exchanges: resistance to front running, scams and hacks, with the speed, low transaction fees and no gas fees only previously available with centralized platforms. Developers can also create their own derivatives and markets to trade.

With Bitcoin reaching an all-time-high at around $18,000, the blockchain and crypto world is once again taking off.

PayPal bought up to 70% of all the newly mined bitcoin since the payments giant started offering cryptocurrency services. And Guggenheim Funds Trust filed an amendment with the U.S. Securities and Exchange Commission to allow its $5 billion Macro Opportunities Fund gain exposure to bitcoin by investing up to 10% of the fund’s net asset value in the Grayscale Bitcoin Trust

Alpha Finance is being listed on the Solstice Testnet! This means that starting on Day 5 of Solstice, users can trade Alpha perpetual markets with up to 20x leverage. We 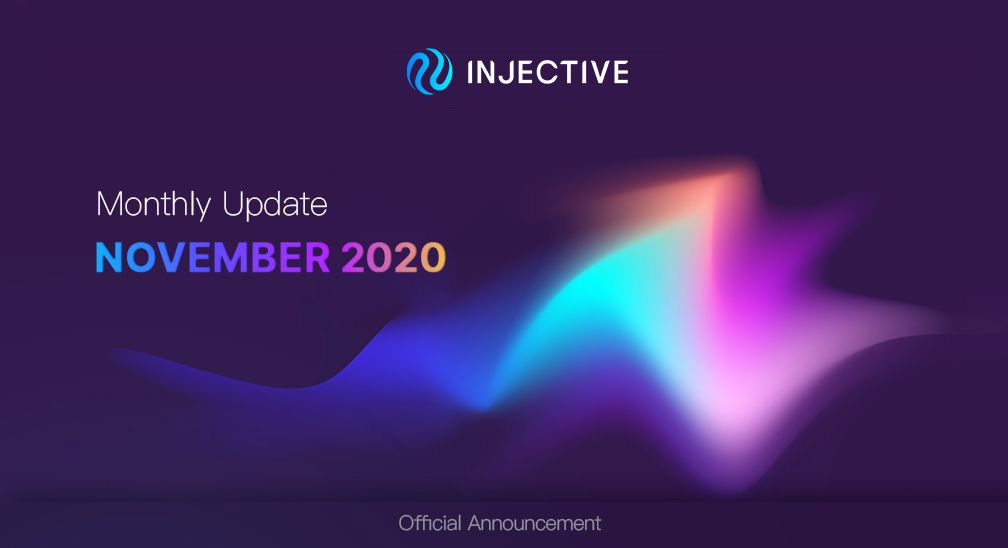 Welcome to Injective’s November update! November marked the one-month anniversary of Injective’s release on Binance Launchpad. Since then, the community has been working nonstop to refine the DEX,