Fears of rising inflation have often dominated public discussions among economists. This article will explore the concept of inflation and analyze whether crypto is a good hedge against it.

In the context of macroeconomics, inflation is the general increase in the price of goods and services in a country, which is typically intertwined with a decline in the value of the country’s underlying currency. In other words, inflation reflects a reduction in the purchasing power of money. For instance, an increase in the price of butter means you're now able to buy less butter with the same amount of money relative to before.

Economists use metrics such as the Consumer Price Index (CPI) and the Production Price Index (PPI) to calculate inflation. The CPI measures the weighted average of consumer goods and services such as food and transportation. These goods and services are categorized in predetermined baskets which are evaluated on a regular basis, often monthly or annually. The CPI is calculated by taking the prices of all items in a given basket and averaging them. On the other hand, the PPI is a measure that calculates the price that companies pay for the goods and services they use in production. In other words, the PPI tracks the costs from the viewpoint of the industries that make the products whereas the CPI tracks the costs of these products from the perspective of consumers.

One of the first indices that became mainstream before the CPI and PPI was the Big Mac Index. The Big Mac Index compares the cost of McDonald’s famous burger in any two countries as a way to determine if a currency is over or undervalued. Launched by The Economist magazine in 1986, it was intended to be a lighthearted means of making exchange-rate theory easier for laypeople to digest, yet has since become a standard global measurement, and the subject of untold numbers of academic studies.

Inflation is a well-known economic phenomenon which has been notably recorded since Ancient Rome. During  the 16th Century, in a particularly famous historic event, following Spain’s conquest of the Aztec and Inca Empires, vast amounts of gold and silver flooded into Europe. The metals were used as money. However, the oversupply of  “metals” resulted in diminishing purchasing power for each unit of metal, or in other words a rise in prices.

This example is often cited by proponents of monetarism, who argue that inflation is intimately tied to an economy’s money supply. However, there is still significant disagreement among economists as to inflation’s underlying causes as well as the best means by which its negative effects can be curbed.

Nonetheless, since the 1970s, governments around the world have typically assumed that inflation occurs when the expansion of the nation's money supply outpaces economic growth. As a result, financial institutions such as central banks attempt to mitigate inflation by taking measures to restrict the supply of money and credit in the economy.

The Role of Inflation

It is important to note the concept of inflation is crucial for the growth of the economy. However, if inflation is uncontrolled and exceeds governments’ expectations, its effect can become detrimental to economic growth.

Investors with tangible assets, such as physical properties or commodities, tend to welcome inflation, as it raises the value of their portfolios.Conversely, for those who hold physical cash, inflation is harmful as it erodes the value of their holdings. Inflation affects both individuals and much larger organizations. Corporations usually hold large amounts of cash on their balance sheets in order to fund operating expenses  and when the currency is depreciating at the rate of inflation, they often adjust their operations accordingly. This can have adverse effects as companies have less working  capital to use in order to  grow their business.

Finally, the depreciation of the U.S. dollar has a broader impact as it's the world’s reserve currency. It's estimated that between 40 to 70% of all U.S. dollar banknotes in circulation are held outside of U.S. borders. Foreign central banks hold dollars but they also have dollar denominated debts.In addition, as the dollar depreciates in value, central banks are more likely to diversify their risk and sell their dollars. The selling of offshore holders would devalue the dollar even further in relation to other currencies.

Signs of Rising Inflation in 2021

During the Covid-19 pandemic, central banks printed 25% of all the money supply in circulation  within a single year. The majority of economists believe that this will dramatically impact inflation levels. The recent CPI and PPI numbers released in April 2021 have supported this claim. Evidently, the CPI numbers showed that consumer prices had increased by 4.2% from April 2020 to April 2021 which was 2.2 above the Fed’s target. The CPI numbers were at the highest level since 2009 which raises concerns among economists since the consumer market has only started to recover and as such these numbers are expected to rise even further. The PPI numbers, also released in April 2021 were up 6.2% compared to last year and are also at their all-time-high values since the index started to be tracked back in 2010.

Many well-respected economists including a Harvard professor Alberto Cavallo, have  pointed out that the real CPI numbers during the pandemic could be even higher than the ones recorded in the April 2021 report. The main point of contention is the baskets of goods and services used to measure the CPI. The Bureau of Labor Statistics assumes that the composition of the baskets hasn’t changed, introducing a potential bias into the measurement of CPI inflation. Arguably, consumption patterns have been greatly affected by the lockdowns as consumers mostly purchase their goods online where the process of data collection is neither standardized nor always available.

Crypto as an Inflation Hedge

If inflation rates continue to rise, it would be important to restructure holdings accordingly. The majority of investors will initially limit their exposure to bonds, since inflation will erode the interest that they pay, and start reallocating capital into assets that fulfill the store of value property.

In December 2020, Jeff Currie, Goldman Sachs’s head of commodities research, called Bitcoin the “retail inflation hedge”. According to many, Bitcoin's fixed inflation rate and limited supply makes it the ideal asset to hedge against potential inflation. Since then, many corporations have started adding Bitcoin to their balance sheets. At the same time retail and institutional investors continue purchasing BTC and this trend is projected to continue as inflation is hard to reign back once it’s started.

Injective recently delved into Bitcoin versus gold as a hedge against inflation. However, hedging in crypto does not only entail holding Bitcoin in non-custodial wallets. Derivative markets have also proven invaluable as they provide a vast array of choices tailored to a trader’s risk tolerance. The most common financial instruments that can protect a portfolio from eroding its real value are inflation-indexed derivatives such as interest rate swaps.

Derivatives markets in traditional finance are often limited in the number of markets and are generally accessible to only wealthy institutions. For example,  European traders may not be able to easily gain exposure to Chinese equity markets. Many of these markets may be more apt to hedge against inflation compared to what is available today for the everyday person.
In order to create a free financial system, Injective has built a permissionless and fully decentralized platform which will provide access to unlimited financial markets. Traders on the platform will not only be able to trade traditional financial markets such as crypto but also create novel markets, including inflation-indexed derivatives. As a result, Injective can equip traders with flexible hedging instruments that are otherwise not accessible. 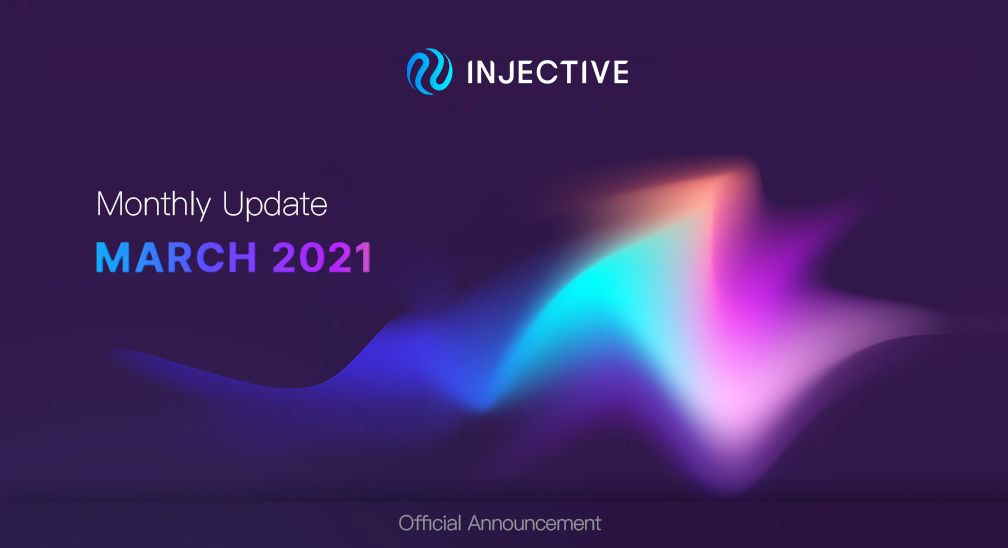 Welcome to Injective’s monthly update! This month gave brand new meaning to the term March Madness, and there are more updates to bring you than ever before. Injective contributors 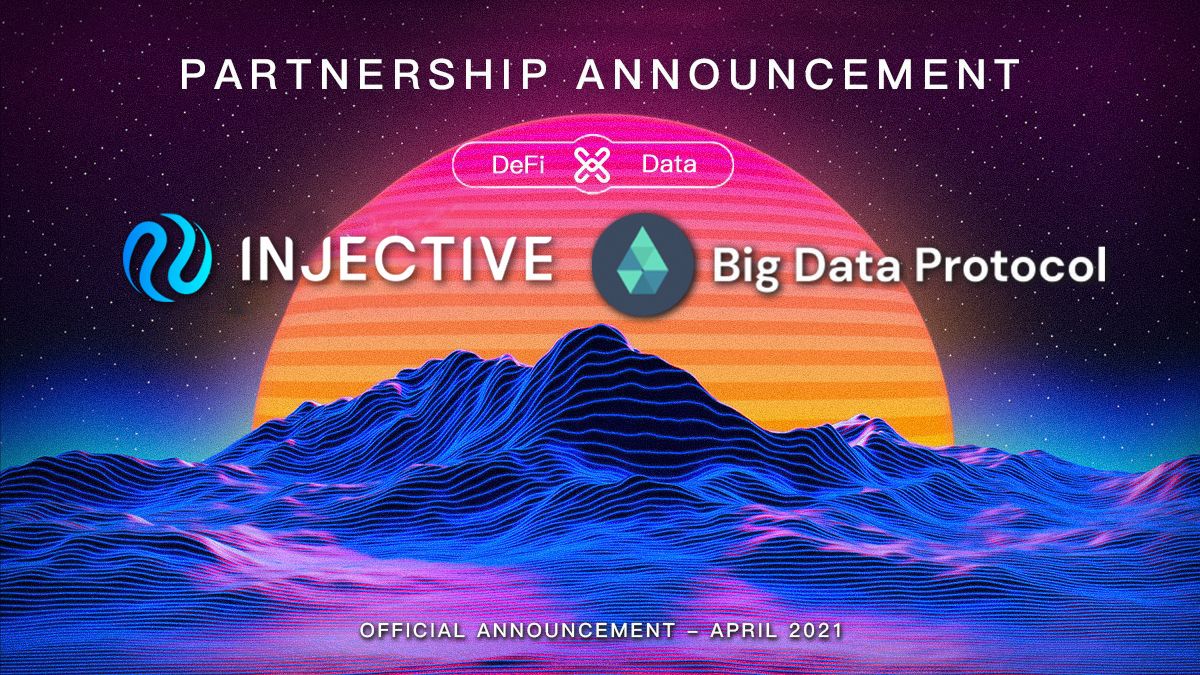 Injective is collaborating with Big Data Protocol (BDP) to create and launch structured data token products. Injective and BDP users can soon create and trade data derivatives based on the